Curious thing. As a newly self-published author, I’ve picked up an inclination to go poking around other independent author’s pages, kick the tires, see what people say about them. Many of them are more established than I am and have a few works out, some even have made a minor name for themselves. Others are about where I am.

The curious thing I’ve noticed is the first few reviews tend to be good ones despite the quality of the book, which I think, speaks well of people’s politeness and might also have to do with general reading habits. I think folks who might write a negative review of a book are unlikely to buy it in the first place, because of content sampling and categories. For me, the categories I avoid most are romance novels and non-fiction.
(Side commentary: Non-fiction my $#@. There’s more truth in most fiction novels than in the non-fiction I’ve read. Non-fiction. So much wisdom in that compound word and its consistent use by book vendors. You’ll notice we as a society agree we won’t call that type of work ‘fact.’ So we have to call it what it’s not. It’s not completely made up, so we say ‘non-fiction.’)
Imagine if I was forced to read through items in my ‘I know I’ll hate it’ pile. I would be tossing single stars around like mosquitoes in a Minnesota summer. With today’s tech, I can easily delete after two chapters any book that doesn’t float my boat. Will I rate a book like that? Probably not. I haven’t read it all the way through, and that doesn’t feel right, rating something I haven’t fully experienced. I think other people feel like this too. Thus the good reviews for the first dozen or so reviewers. They liked it enough to read it through. Simple.
Then a book becomes popular. The ones that hit the tipping point and have a sudden popularity boost will start getting read based on advice or the recommendations of those first few reviewers, or combinations of those things.
Then you get what I call the ‘Twilight’ or ’50 Shades of Gray’ phenomenon. People glom onto a book of the year and everyone reads it. The ratings drop to reality, because you have people who otherwise would dislike the book (I read the first Twilight novel, despite my better judgement, for example) start to read it despite their preconceived notions. Chances are they should have stuck with their preconceived notions.
In a way, I wonder why on earth anyone would continue to read a book they think is bad after a few chapters, and they start to realize they don’t like the style or characters. Maybe they’re just gluttons for punishment, or the author totally drops the ball in the last half of the book? Possible. Still, I do wonder.

Good news! I’m prepping my book, Demigod Conception, for print-on-demand. Paper’s a bit expensive, but it would make some really cool holiday gifts. I plan to have it ready to go by Sunday.

Amazon’s print-on-demand solution is remarkably easy to use. Hopefully it’s as quality a product as their online tool and their sales service suggests. So far, so good.

If you can’t wait and want to buy it now, it’s available on amazon.com Kindle.

Finished my first marketing-themed short story today. They say you should write what you know, but frankly, writing about marketing seemed to be a quick way to bore audiences. That is, until today!

My hero’s a 10-year-old who teams up with a marketing executive and a computerized store marketing system to… Well, it’s a short story, so I can’t give away the good part, can I? Still, I dig the concept. It’s sci-fi horror, but it’s also suitable for young-adult audiences, I think. Benign language, minimal bloodshed. When I clean it up, I think I’ll shop it around a bit.

Maybe someday I’ll overcome my fear of clowns enough to write a story with clowns in. Clowns on tall structures. Acrophobia and Coulrophobia blending in a frenzy of falling wigs and oversized shoes.

Willies. Clowns give me the willies. 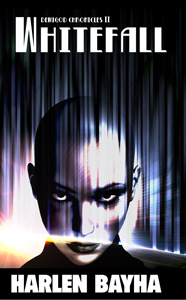